A Peek inside Zimbabwe's Prisons 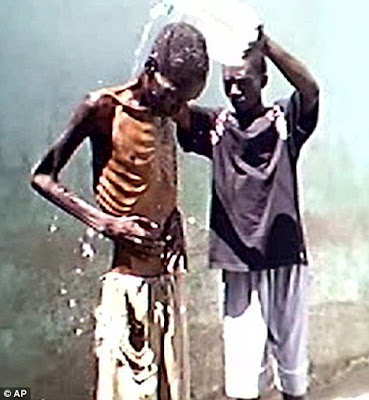 POLITICS - What you are looking at is not starving people in Ethiopia.

Its not a country that is in the midst of a drought. Its images from Zimbabwe's prisons, a country with plenty of food to go around, but ruled by dictator Robert Mugabe.

And what is the crime of these prisoners? Its not stealing or murder. Its petty things like... speaking out against Robert Mugabe, helping foreigners, speaking to foreign reporters, helping Robert Mugabe's political rivals... or just voting against Mugabe.

The unlucky ones go to prison and die slowly. The more fortunate ones get killed and their bodies dumped in an unmarked grave. Difficult to say which is better.

The newly released images provide a rare look inside a Zimbabwean prison show emaciated inmates too weak to stand and eating as if they can barely bring food to their mouths.

Human rights activists and former prisoners have spoken of horrifying conditions in the country's jails and prisons but there has been little firsthand evidence available... because most of the prisoners die of starvation or organ failure.

Godknows Nare spent four months on the behind-the-walls documentary, training insiders to capture the footage. His documentary "Hell Hole" aired Tuesday on SABC, the South African state broadcaster, and is now being syndicated internationally by Associated Press Television News today. Nare says he hopes the footage will persuade foreigners and Robert Mugabe's new coalition government to step in to help. 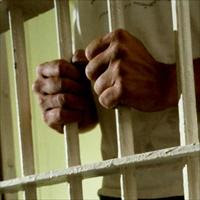 But what is chances of Robert Mugabe helping people that disapprove of his government? Its a snowball's chance in hell.

In one scene from "Hell Hole" emaciated prisoners, wasting away because of vitamin deficiencies, are shown on mats in cells furnished with only blankets and the thin mattresses. The prison menus have been reduced to tiny bowls of corn porridge (one per day, and the inmates barely have the energy to bring the food to their mouths. The inmates are also given salt water to drink, to make them thirsty all the time.

Annah Y. Moyo, a Zimbabwean lawyer who works with the Southern African Centre for Survivors of Torture, said conditions in Zimbabwean prisons were "a form of torture." Moyo now lives in exile out of fear of being tossed in "Zimbabwe's Prisons of Death".

Moyo, who was not involved in making the documentary, says Zimbabwe's soaring inflation, supply shortages and rampant corruption have played a role, with prison officials taking food that should go to prisoners and selling it on the black market.

"Everyone knows that if you're sent to prison, your chances of coming out alive are slim," says Moyo.

Lack of medical care in jails and prisons also has been an issue, with concern that cholera, at epidemic levels among free Zimbabweans, would take an even higher toll in crowded cells.

Many doctors in Zimbabwe have fled the country and now live in exile. Indeed anyone with wealth or education has pretty much left, becoming refugees in neighbouring countries. The few that remain are trying to fight against Mugabe's reign of terror. 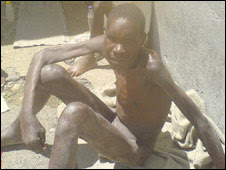 Last year, the Zimbabwean civic group 'Women of Zimbabwe Arise' dedicated a report on the collapse of the country's health system to one of its political leaders, Thembelani Lunga, who died in prison after only four days.

Earlier this month, Roy Bennett, an opposition politician was released from prison after he was granted bail (he was essentially ransomed) and is now speaking out against the harsh prison conditions. Bennett was noticeably a lot thinner after his jailing and says five people died during his incarceration and it took prison authorities 24 to 48 hours to collect the bodies.

Starving political rivals, mass unemployment, a cruel dictator who cares only about wealth and power... its not just the prisons that are a hell hole.

Note: There are plenty of videos on this topic on YouTube. Some of them are pretty graphic.