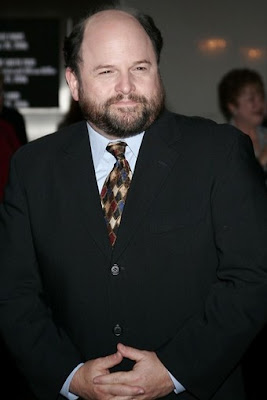 Seinfeld star Jason Alexander is the latest star to step onto the scales for Jenny Craig— to she pounds as the newest spokesperson for Jenny Craig. “It’s like someone’s clubbing me over the head it’s so obvious I should be doing this,” the funnyman told PEOPLE on Monday. “It was a deadly combination of I’m fat and they work,” he says of his decision to try the program. The former KFC spokesperson says he was drawn to Jenny Craig after watching footage of his recent appearances in film and television. “I just got to a point where when I would look at the Seinfeld reunion stuff or one of these other projects that I had done, I said, ‘I don’t like the way that guy looks. That guy is not attractive in any way, shape or form to me,’” he says. “It made me go, ‘Oh, yuck!’” Alexander hopes to lose between 30 to 40 pounds to reflect his weight during the early years of the show that made him a star. He jokes “Over the course of the nine years of Seinfeld, I can actually see my hairline go away and my waistline increase. One of them I can do nothing about; the other I can,”. He credits his initial weight gain to sympathy-weight during his wife’s two pregnancies where gained about 15 pounds during each — and the increased quality of craft services on the Seinfeld set — “it will absolutely kill ya!”

Jason was also inspired by the success of friend and fellow Jenny Craig spokesperson Bertinelli. The actor says he’s excited to join the mostly-female ranks of Jenny Craig spokespeople. “It’s hard for me to think of the Jenny Craig program — or any weight loss program — as a female thing,” he says. L.A. Clippers player Baron Davis has also endorsed the program. “I’m trying not only to do it for myself but I’m encouraging other guys to come on board and say we can do this. This will work for us, and we can do this and deal with the problem,” says Alexander. “If somebody goes, ‘Well, if George can do it, I can do it!’ – that’s great. Whatever it takes to get you heading in the right direction. If I’m it, great!”
4 comments: